In the Garden of Lies (part 1) 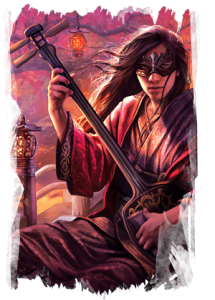 In the City of Lies, it was almost refreshing to see a dispute settled with the clean strike of an iaijutsu duel.

Yogo Hiroue had suggested to his lord that it might be advantageous for them if Bayushi Gensato threw the fight. “After all,” he’d said, “Kitsuki-san will hardly be inclined to stay at your
party for long if she’s humiliated by defeat at his hands.” He thought, but did not say, she knows your reputation too well.

The city’s governor, Shosuro Hyobu, had dismissed this notion with a single flick of her fan. “Kitsuki-san may not be trained as an investigator, but she is a master of the Mirumoto
technique—however unorthodox her style may be. If Gensato does anything less than his best against her, she will know.” So now the two bushi stood facing one another in the night, feet carefully planted in the gravel of the courtyard, the torchlight around them casting shadows that danced even while the sources remained still. Hiroue made a show of examining Kitsuki Shomon’s stance, but it truly was a show; he was at best an indifferent swordsman himself. Like all Mirumoto-trained bushi, Shomon stood ready to draw not only her katana but also her wakizashi. Any unorthodoxy beyond that, however, was invisible to him.