The only way to keep a secret is to tell the truth, but not the whole truth

Ben Franklin : "They that can give up essential liberty to obtain a little temporary safety deserve neither liberty nor safety."
Haut

The only way to keep a secret is to tell the truth, but not the whole truth

Ben Franklin : "They that can give up essential liberty to obtain a little temporary safety deserve neither liberty nor safety."
Haut

Bishamon was the Fortune of Strength and one of the Seven Fortunes. Rokugani saw him as their protecting deity, and often asked for his blessings before a battle. There were countless temples and shrines devoted to Bishamon, but the most famous one, Bishamon Seido was located in Lion Clan lands.

Bishamon was a large man, who clutched a miniature model of a great castle, carved in perfect detail. If one looked closely enough, there almost seemed to be little people moving about inside. He wore a heavy samurai armor and wielded a naginata made of silver.

When Bishamon intervened was on a dramatic scale. Unfortunately, he could also be unpredictable towards those in whom he had taken an interest, whether they were blessed or cursed. If Bishamon felt that someone under his scrutiny had been weak or dishonorable, he might arrange for a suitable test of their courage.

Monks that served the temples to Bishamon were allowed to marry and had families. The direct descendants of Shinsei were hidden within them, and only to make themselves known when it became necessary to gather the Thunders once more.

Invasion of the Celestial Heavens

Bishamon fought Akuma no Oni during the Invasion of the Celestial Heavens. In 1160 the invasion was halted when the words of Hantei Naseru tricked Fu Leng into distrusting Daigotsu, whose faith was the source of Fu Leng's power. Taking advantage of this moment of weakness, Bishamon deprived Fu Leng of the Emma-O's Spear, and Hoshi pushed him back to the gates of Tengoku. Fu Leng was once again confronted by the Seven Thunders and decided to retreat.

Bishamon favored the Master of Air, Isawa Nakamuro. In 1165 he granted the shugenja with a spear to fight Iuchiban in the Siege of Gisei Toshi.

Rosoku, the heir of Shinsei, had been murdered and it angered Bishamon. In 1167 the Fortune appeared in Kagoki, the most fertile Scorpion village and razed much of the farmlands for their inability to protect him. The Scorpion faced starvation as a result. Since that the area was called Bishamon's Curse. 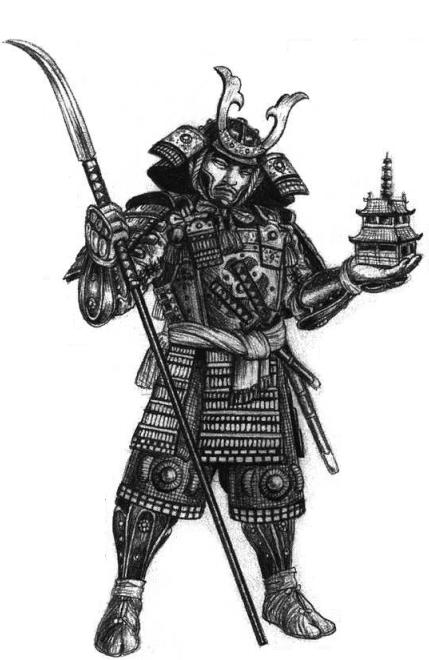